“Annual house price growth slowed modestly to 12.1% in April, down from 14.3% in March – nevertheless, this is the 11th time in the past 12 months that the annual growth rate has been in double digits. Prices rose by 0.3% month-on-month, after taking account of seasonal effects – the ninth successive monthly increase, though this is the smallest monthly gain since September last year.

“Housing market activity has remained solid with mortgage approvals continuing to run above pre-Covid levels. Demand is being supported by robust labour market conditions, where employment growth has remained strong and the unemployment rate has fallen back to pre-pandemic lows. With the stock of homes on the market still low, this has translated into continued upward pressure on house prices.

“Nevertheless, it is surprising that conditions have remained so buoyant, given mounting pressure on household budgets which has severely dented consumer confidence. Indeed, consumers’ expectations of their own personal finances over the next twelve months has dropped to levels last seen during the depths of the global financial crisis more than a decade ago. Moreover, housing affordability has deteriorated because house price growth has been outstripping income growth by a wide margin over the past two years, while more recently borrowing costs have increased (though they remain low by historic standards).

Why is activity so buoyant?

“The proportion of people considering a move was highest amongst private renters (at 45%) but was also elevated amongst those living with family (44%) and those owning their own home (30% of those owning their property outright and 42% of those owning with a mortgage). Interestingly, despite mounting pressure on household finances, the share of people moving or considering a move was higher than during the height of the pandemic in April last year across all tenure types, as shown below.

Are households still ‘racing for space’?

“The survey results suggest that shifts in housing preferences as a result of the pandemic are continuing to support housing market activity, though to less of an extent than at this time last year. For example, around a quarter (24%) of those moving or considering a move said that this was to move to a larger property (a similar outturn to April 2021), and for most age cohorts a majority are still looking to move to less urban environments.

“However, the proportion of those citing a desire to get away from the hustle and bustle of urban life or access to garden / more outside space has declined substantially – to 12% and 15% respectively, down from 25% and 28% in April 2021.

“Perhaps unsurprisingly, given the pressure on budgets, financial reasons are cited as a factor motivating a move by a sizeable minority. 17% of those moving or considering a move said they were doing so at least in part to reduce spending on housing, either by moving to a different area and/or by moving to a smaller property.

Where next for the housing market?

“We continue to expect the housing market to slow in the quarters ahead. The squeeze on household incomes is set to intensify with inflation expected to rise further, perhaps reaching double digits in the quarters ahead if global energy prices remain high. Moreover, assuming that labour market conditions remain strong, the Bank of England is likely to raise interest rates further, which will also exert a drag on the market if this feeds through to mortgage rates.”

1 Research conducted online by Censuswide, 6-7 April 2022, with a nationally representative 3,003 general consumers aged 16+ across the UK. 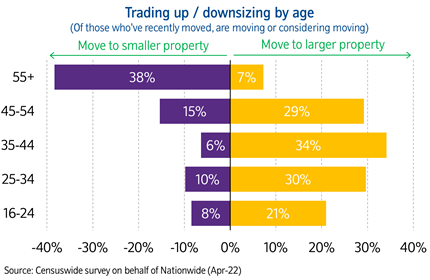 Trading up downsizing by age Apr22